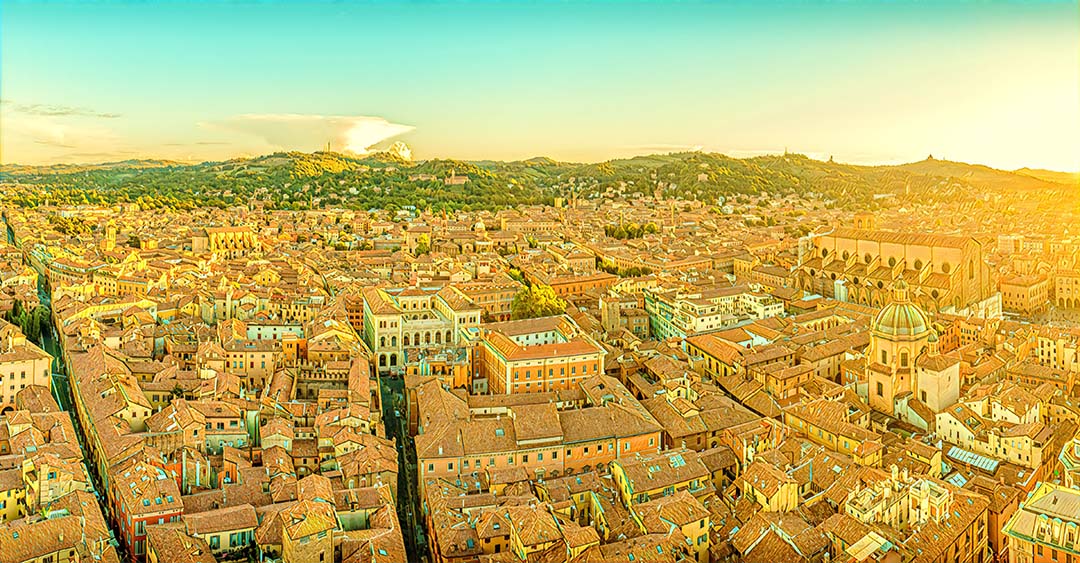 Bologna is the capital and largest city of the Emilia-Romagna Region. It is located between the Reno and Savena rivers in Northern Italy. Bologna was founded by name Felsina in the end of 6th century by Etruscans. Later, in the end of 2nd century BCE, it became Roman colony and was named Bononia. In late 12th century city became one of the main commercial and artisanal centres of northern Italy. Today, Bologna is major industrial, commercial and agricultural centre with many large companies headquarters.

Bologna has beautiful historical centre which contains basilicas, palaces and squares which were carefully conserved. The city is known by several aliases such as La Dotta, La Grassa, and La Rossa, meaning the educated, the fat and the red. La Dotta nickname was earned due to oldest university in Europe. La Grassa refers to it’s great cuisine which is famous for Prosciutto di Parma, Parmigiano-Reggiano and Mortadella. In addition, Bologna is referred as the gastronomic capital of Italy. Finally, La Rossa, meaning the red, refers to city’s brick architecture, red roofs and some say that it also represents the fact it is birthplace of Italy’s political left.

Famous for the oldest university in the Western world, Bologna prides itself with lively student population, unbelievable cuisine, brick terracotta-roofed architecture, theatre, and nightlife. Whilst there, don’t miss the chance to visit the Duomo – one of the finest Romanesque buildings in Italy, also Renaissance structures such as City Hall, the Fountain of Neptune or Basilica di San Petronio. Bologna is often skipped on travel itineraries due to other Italy’s more popular cities, however, it has plenty to offer. While you are here do not forget to take a look at food markets and sip some cappuccino at mesmerizing squares.

Weather in Bologna is influenced by the Mediterranean Sea, therefore summers are hot and winters are mild. Average temperature vary from 1° C in winter up to 30° C in summer. The best time to visit Bologna is from April to October.

When choosing travel dates to visit Bologna you should take into account tourist peak season which is between June and August, therefore, you could save money and avoid crowds in the shoulder months of April to May or September to October.

You may browse the collection of hotels in Bologna HERE with Hotelscombined.com

Rent a car from Bologna airport HERE with Rentalcars.com

Use our search to find the best cheap flights to Bologna. If you can not find the right dates or destination, do not hesitate to change search settings or you can check our already found deals HERE or flights to alternative weekend destinations can be found HERE!