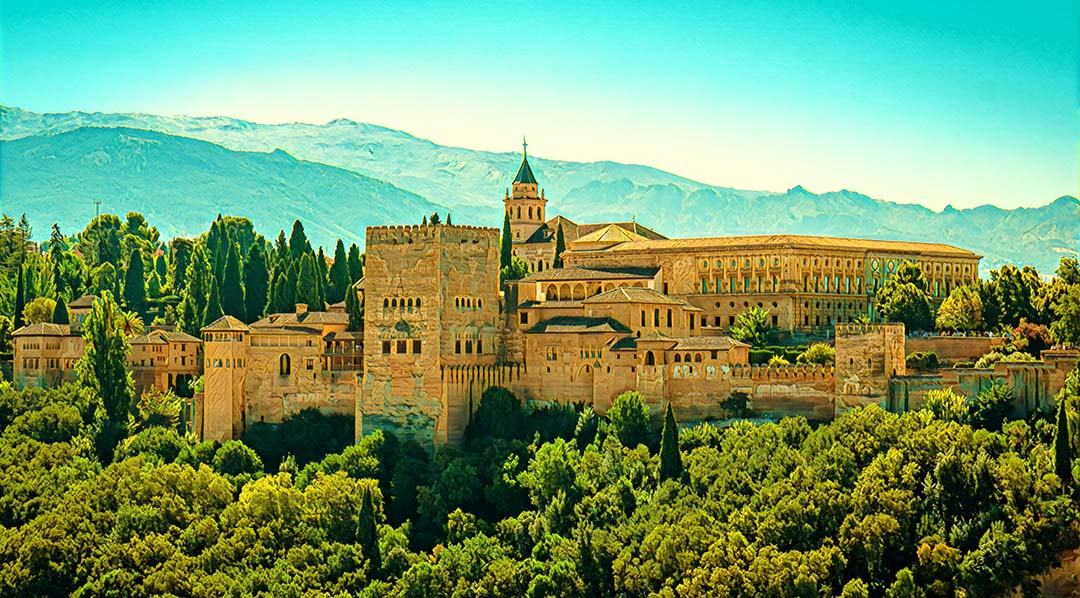 Granada is a city in the Andalusian region of Spain at the confluence of the Darro and Genil rivers near the Sierra Nevada Mountains. It is a city with rich history and impressive culture and one of the most popular tourist destinations in Spain.

Granada is an old city of Moorish civilization. The city is known for the Alhambra Palace (14th century palace complex), which is considered a masterpiece of Moorish architecture. It is a complex of buildings consisting of three palaces and the surrounding royal gardens with plants, streams and fountains. Next to the Alhambra Palace, you will find Generalife Palace with beautiful gardens, which were the summer residence of the rulers. Granada also has many historic and architectural monuments in the city centre. It is worth to visit the Catedral de Granada (16th century, near Alcaiceria bazaar), the Basilica of San Juan de Dios (16th century), the Church of San Gil y Santa Ana (16th century), the Madrasah of Granada (14th century), the Cartuja de Granada (monastery, 16th century) and the Corral del Carbon (former warehouse and merchant inn, 14th century).

One of the most interesting places in Granada is the historic Arabian quarter Albaicino, known for its narrow streets, white-painted houses, small shops and Arabic teahouses. Here you can taste traditional Arabic dishes, have a cup of tea or smoke a pipe. In addition, the area offers stunning panoramic views of the Alhambra Palace. Another beautiful area of the city is Sacromonte. It is an old gypsy quarter which is famous for the flamenco dance performances in the mountain caves. For a modern Granada, you should visit the Calle Elvira Street where you can buy souvenirs and try traditional Granada cuisine at nearby restaurants. We recommend tasting La tortilla del Sacromonte (omelette), La pipirrana (salad) or Gazpacho (cold tomato soup).

Weather in Granada is influenced by the Mediterranean Sea, therefore summers are hot and winters are mild. Average temperature vary from 2° C in winter up to 34° C in summer. The best time to visit Granada is from April to October.

When choosing travel dates to visit Granada you should take into account tourist peak season which is between June and August, therefore, you could save money and avoid crowds in the shoulder months of April, May or September, October.

You may browse the collection of hotels in Granada HERE with Hotelscombined.com

Rent a car from Granada airport HERE with Rentalcars.com

Use our search to find the best cheap flights to Granada. If you can not find the right dates or destination, do not hesitate to change search settings or you can check our already found deals HERE or flights to alternative destinations can be found HERE!