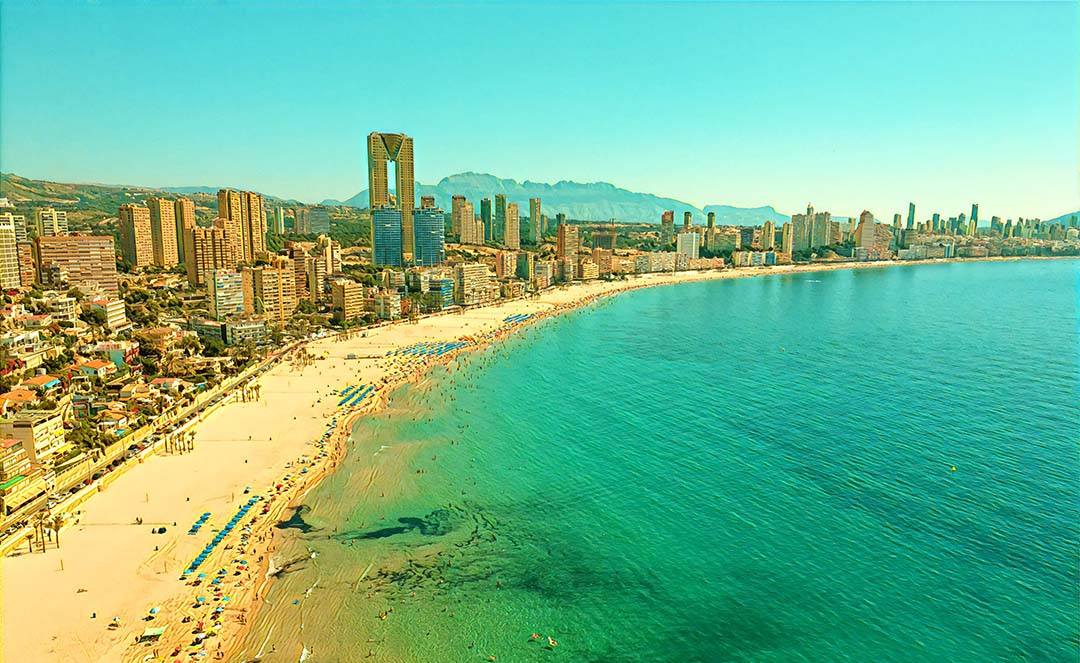 Alicante is a Spanish city located on the Costa Blanca coast, near the Mediterranean Sea. It was founded by the Moorish in the 8th century. Formerly an important Mediterranean port, today it is a popular seaside city with stunning beaches and a blue sea.

In the centre of Alicante, on the hill of Benacantil lies the medieval Santa Barbara Castle (Castillo de Santa Barbara, 16th century) which now is a city museum, by the way, the hilltop can offer great views. We recommend walking along the streets of the Old Town and visit the Saint Ferdinand Castle (Castillo de San Fernando, 19th century), the Concatedral de San Nicolas (17th century), the Basilica of Santa Maria (Iglesia de Santa Maria, 16th century) and the city’s Market (Mercado Central, early 20th century). In the city centre you will also find all the major museums – the MACA Contemporary Art Museum (17th century), the Gravina Museum of Fine Arts MUBAG (18th century) and the Archaeological Museum (20th century), featuring works by famous artists, historical relics and archaeological findings.

Alicante is famous for its coastal streets covered with palm trees (Explanada de Espana, Paseo Maritimo, Rambla de Mendez Nunez) where you can find many shops, cafes, restaurants. By the way, in the evenings these street become a stage for street artists. In addition, here you can have a great time listening to music, dancing and tasting traditional Spanish dishes such as paella alicantina, arroz a banda, salazones or trying local wine. One of the most beautiful areas of the city is the Barrio de Santa Cruz, an old quarter of the city located on the slope of Mount Benacantil, famous for its narrow streets and colourful home facades. The city also has many beautiful parks like Canalejas, El Palmeral, Parque del Morant, Parque de Quijano, where you can stroll and take a break from the bustle of the city. For sand and sea lovers Costa Blanca can offer 170 amazing beaches, most famous are Postiguet, Poniente, San Juan, Guardamar and many more. Costa Blanca is one of the sunniest places in Spain, where the sun shines almost all year round (more than 300 days on average per year), making it an ideal holiday destination.

Weather in Alicante is influenced by the Mediterranean Sea, therefore summers are hot and winters are mild. Average temperature vary from 6° C in winter up to 31° C in summer. The best time to visit Alicante is from April to October.

When choosing travel dates to visit Alicante you should take into account tourist peak season which is between June and August, therefore, you could save money and avoid crowds in the shoulder months of March to May or September to November.

You may browse the collection of hotels in Alicante HERE with Hotelscombined.com

Rent a car from Alicante airport HERE with Rentalcars.com

Use our search to find the best cheap flights to Alicante. If you can not find the right dates or destination, do not hesitate to change search settings or you can check our already found deals HERE or flights to alternative destinations can be found HERE!